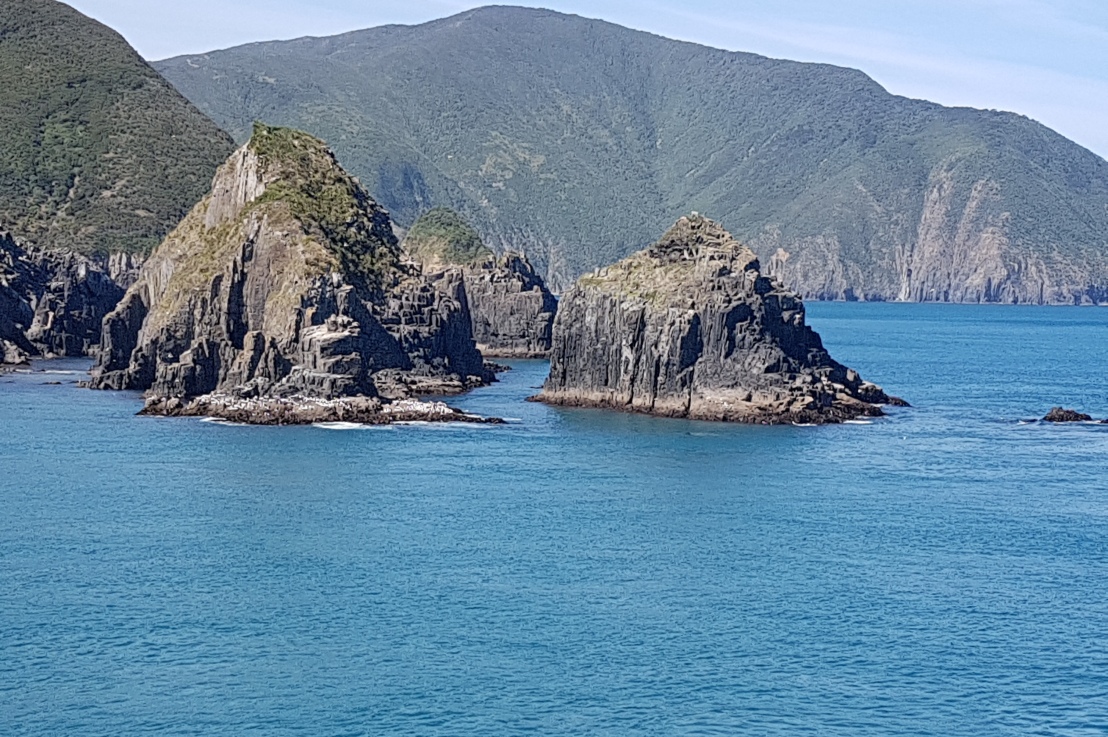 5 nights is just not long enough to spend in this wonderful piece of Godzone….

All too soon, our time has come to an end.  We decided to spend our last morning in town having a look around, before heading back to the fantastic pool to swim our sorrow away for the afternoon.

Jase, Caitlyn and I decided to have a crack at the Lake Hole in One challenge.  You pay $20 for a bucket of 25 golf balls and basically take out all of your pent up rage and anger (if you have any – otherwise it’s a rather strategic, careful game!) with club and ball and aim for a pontoon in the lake.  It’s hard enough to achieve this (if you’re a weakling like me!) but even harder of course to then get the hole in one which is on the pontoon.  If you manage to get it, you win $2000.00.  Apparently someones strikes gold with this about once a fortnight (we didn’t!). 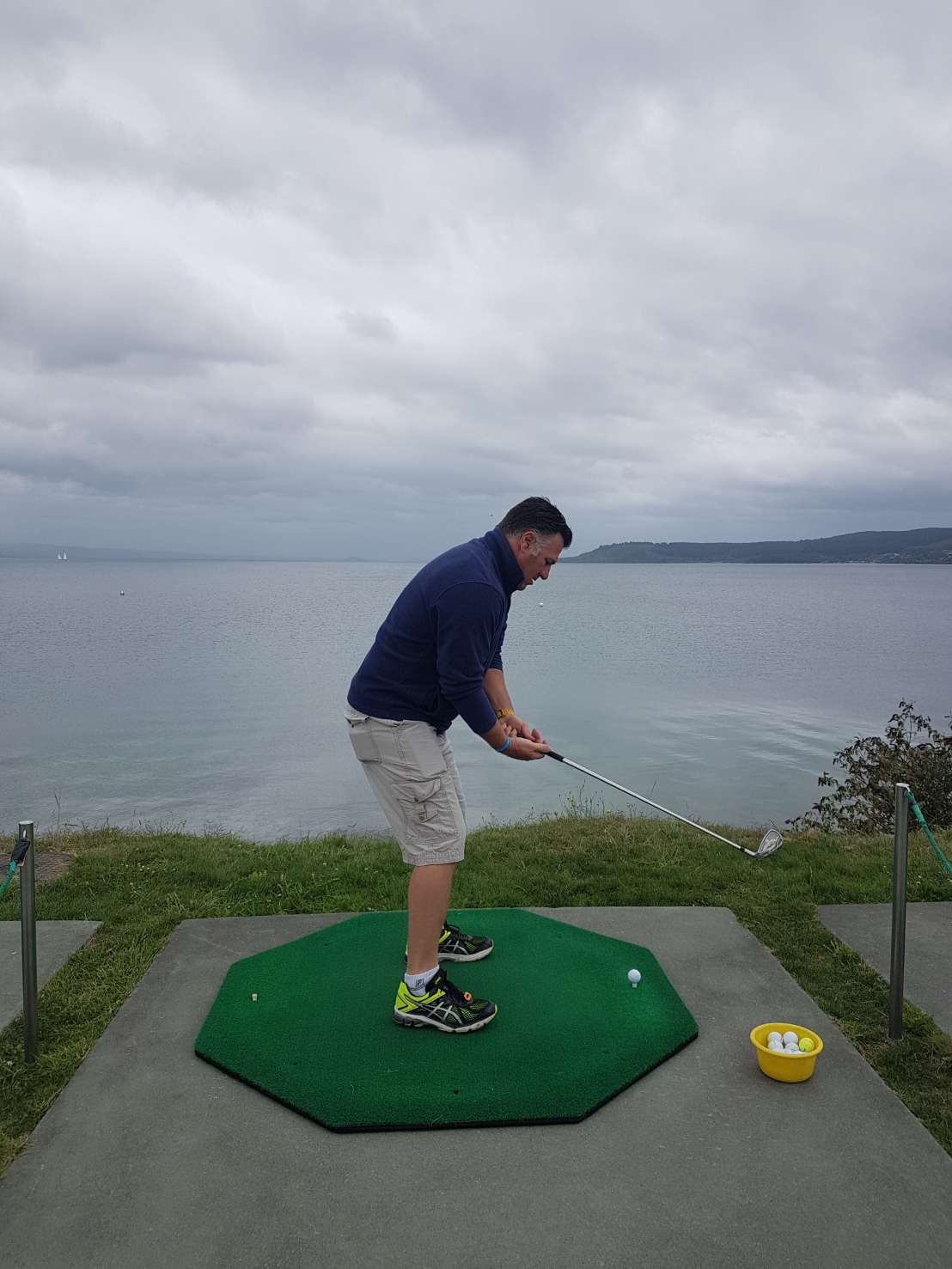 After Hole in One, we met up with Craigs family and went to play minigolf.  I have to say this was a bit of a logistical nightmare, thanks to either greedy or unexperienced staff.  There were 9 of us, which obviously takes a while to get through.  What should happen (I believe) is that when you book in, you have to wait a certain length of time before you start, so there is a working distance between groups, especially at busy times of the year like the Christmas holidays.

However, this lady just kept taking group after group, handing out the clubs and sending people on their way.  This created a huge bottleneck, with another group watching our game while waiting, and another group behind them putting pressure on.  We were stuck behind a family as well, so in the end with pushing the kids up one hole further when we could, we lost of track of scoring.

Now that is a disaster.  Anyone who knows me (and Jase, and Craig) knows that we are fiercely competitive and there are no games where “everybody is a winner”.  So, we ended up having our own wee 3 way game but really, the enjoyment was taken out of it with the pressure of people just everywhere.

After mini-golf, we walked back to town to grab some lunch.  KFC for Craig’s family, while Jase, Caitlyn & Amber had Subway and Zach and I had Sushi.  We sat outside at a picnic table overlooking the lake and ate our lunch before my family headed back for some r&r at the holiday park, and Craig’s family did a bit of shopping.  We met up with Mum and Dad back at the park and the afternoon was spent in the pool.

We headed to the Lonestar for dinner, which was lovely.  I’m always impressed when the staff get orders right for big groups.  There were 11 of us, and the staff were friendly, accommodating and got it all bang on right.  Well, apart from the young girl who dropped Tobi’s burger on the floor as she walked up to the table.  I felt so sorry for her!  She kept calm though and Tobi was busy drawing on the colouring in paper the kids were all given so he didn’t worry about it at all.  Another burger was quickly supplied.

Driving out the next morning at 8am was a bit sad.  I felt we’d all had a really relaxing, healthy holiday and I wasn’t ready to leave!  We’d had a bit of a problem with a massive group of people somewhere near to the park (but not in it) who were screaming down a megaphone with all their audience singing and hollering until about 1am which demented everyone in the park.  We kept hearing guests going outside their tents or rooms and screaming for them to shut up.  Anyway, the council and police were getting onto it by the time we checked out, so hopefully that doesn’t happen again.  Not so bad for us being in a room, but for the families with wee kiddies trying to sleep in a tent, it would have been horrendous.

We didn’t get to see the mountains heading south as it was a bit of a miserable day, but the time flew quickly as we listened to music and chatted.  We stopped in Levin for lunch and were at the ferry terminal in Wellington right on time.

The weather in Wellington was sublime…..  a very light breeze, stinking hot sun and calm sea’s.  Absolutely PERFECT for a crossing on the Interislander.  We simply couldn’t have asked for better. 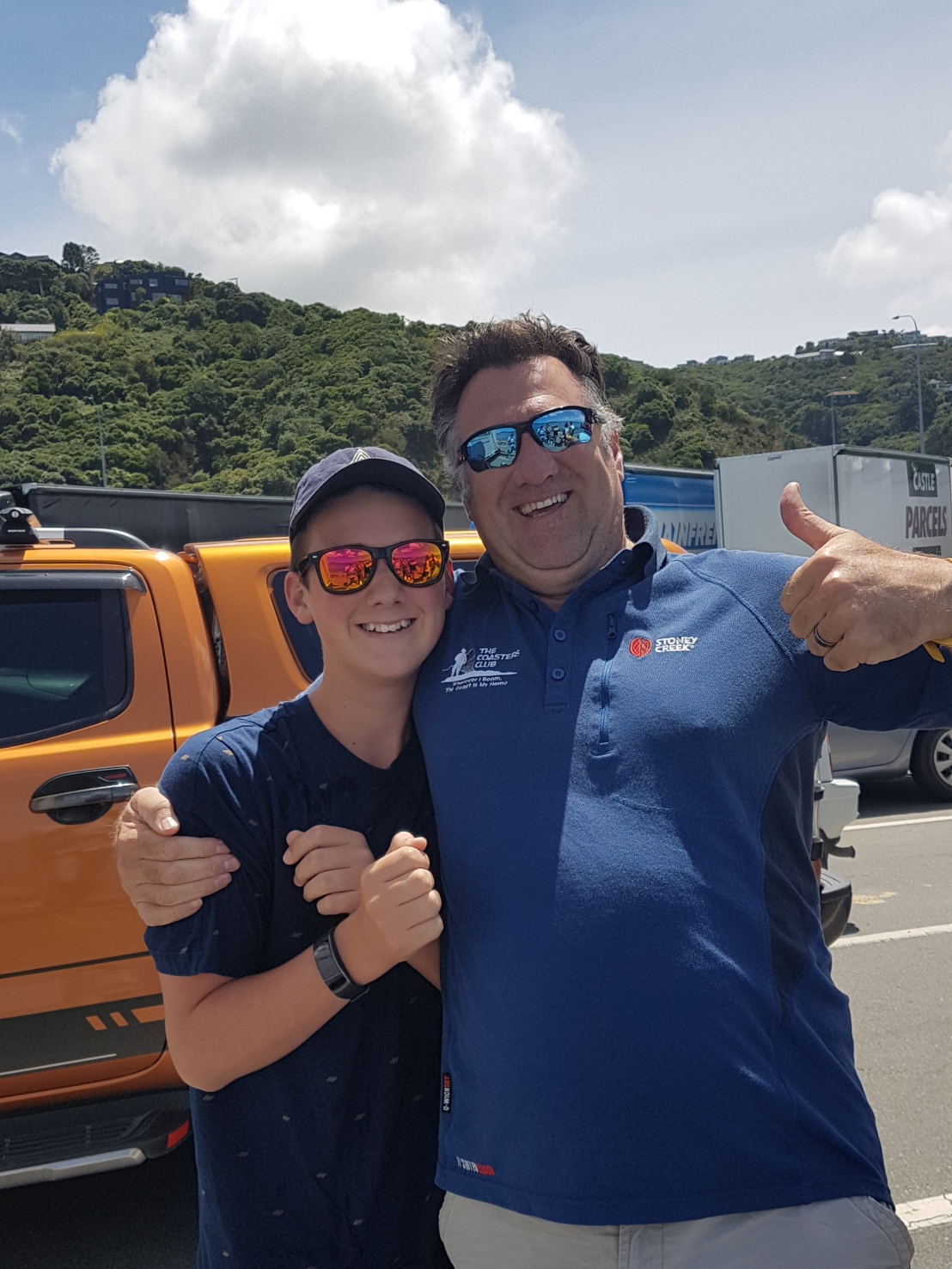 The crossing was smooth, calm and sunny.  We sat on the deck, had a drink and watched the world go by.  Tracey met up unexpectedly with some of her relatives on the boat which was cool, and the kids all got souvenir coins which they were excited about. 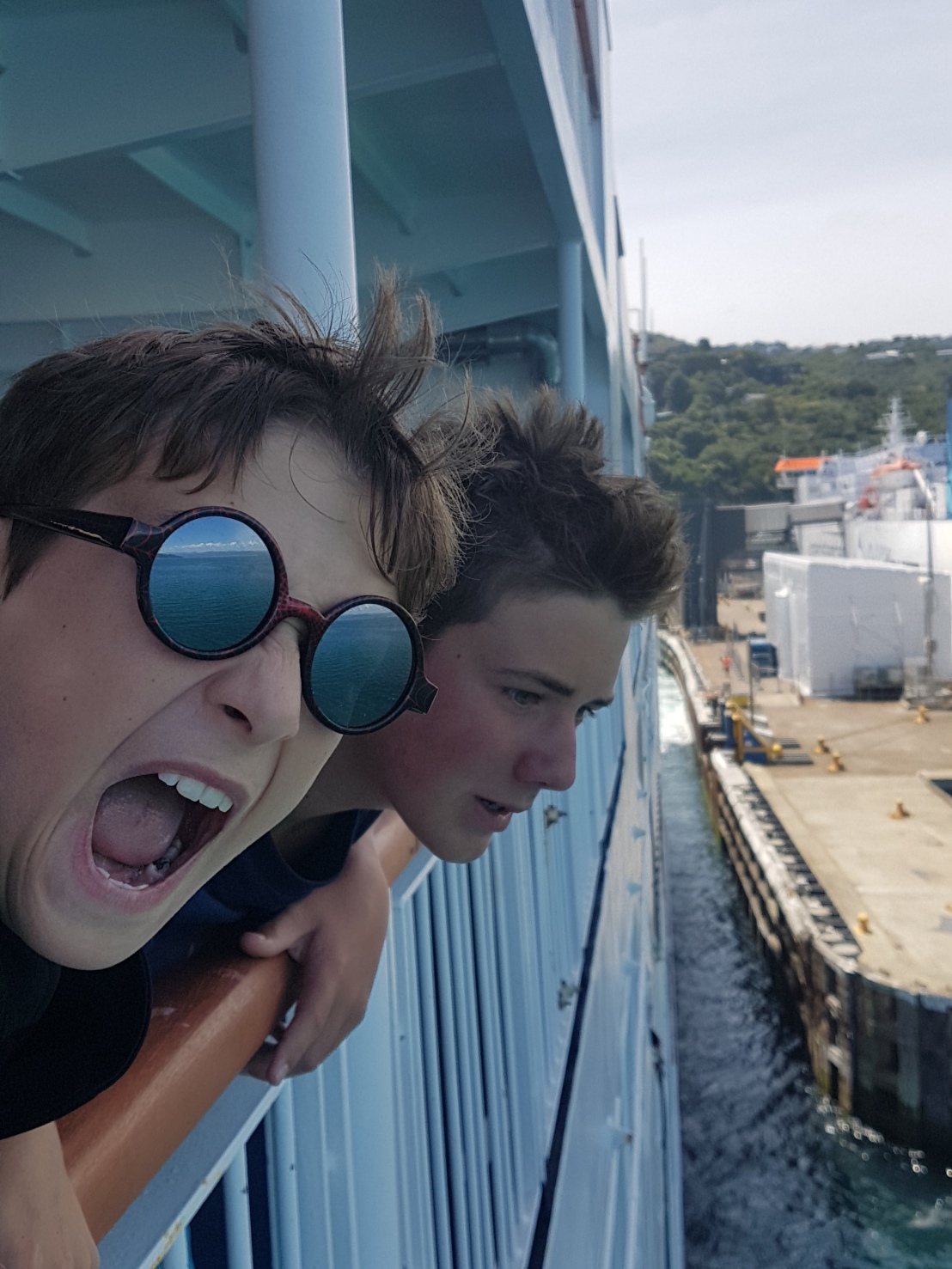 When we got to Picton, we decided to just get a pie at the petrol station and head for home, while the rest of the group wanted something a bit more substantial.  We grabbed our food and kept heading for home, arriving about 8pm.  I have to say the pie at the Z Service Station in Picton was one of the BEST I’ve ever had….  I savoured every mouthful of my pepper steak pie and the rest of the fam did too.  Yummo 🙂

So, we’re home now.  It’s a bit quiet without our fur babies, who don’t get picked up until tomorrow.  The rest of the family are heading this way and will be here shortly for the night before driving the final 4 hours tomorrow back to Hokitika.

A wonderful, relaxing, rejuvenating family holiday that everyone should experience!!!! 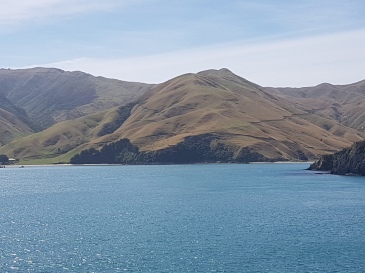 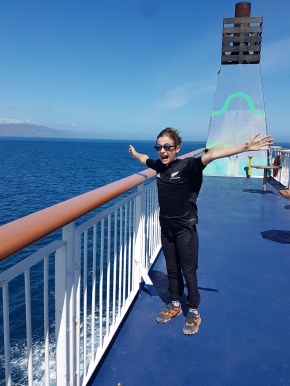 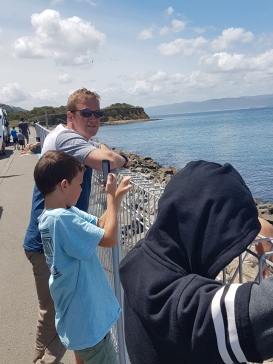 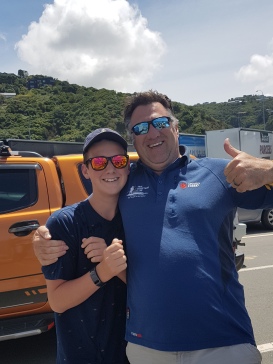 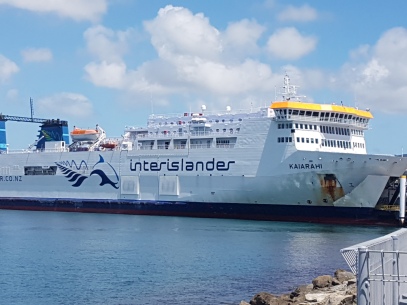 We live in Nelson, New Zealand which really is Paradise!

We take great pleasure in the beauty around us, from the scenery of places, to the cultures and the food.

Jason’s particular love is cars, so he will be reviewing different vehicles we own or rent, while Kylie’s love is travelling, so you’ll be hearing all about our trips!

While at home, we get the most enjoyment out of spending time with our three children and our fur babies.

PO Box 3674
Richmond 7050
New Zealand
+64 21 162 1899
Please feel free to contact us any time with feedback on our site or opportunties to promote your destinations or vehicles.